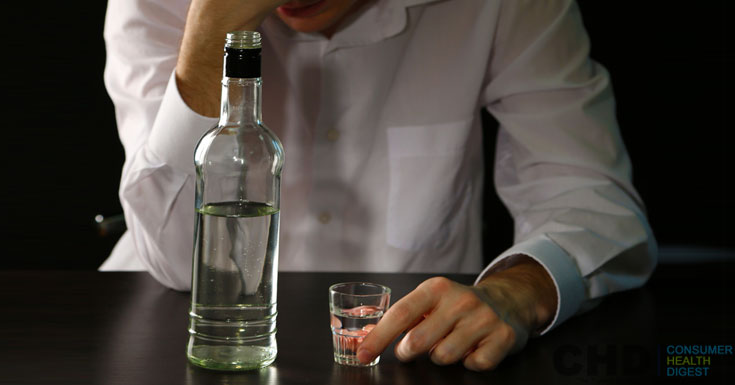 Alcohol cannot be stored and must be oxidized, predominantly in the liver. Alcohol metabolism has a limit in the liver, although someone who has been drinking alcohol for some time may induce his liver enzymes thus allowing the liver to metabolise more. Alcohol provides empty calories as energy only with no other contribution to nutrition.

80-85% of ethanol oxidation is by initial conversion to acetaldehyde by ADH, which if it accumulates in cells can cause cell damage.

Acetaldehyde is further metabolized by several pathways, one of which results in carbon dioxide and water, while another leads to other biochemically important compounds such as fatty acids. Triglyceride accumulation can lead to fatty liver.

10-15% of alcohol is metabolized by a microsomal P450 ethanol oxdising system (MEOS). Through this pathway, potentially injurious reactive oxygen radicals (free radicals) are produced. A lack of protection against free radicals may partly explain mitochondrial injury inside cells.

The more alcohol is consumed the greater the risk of alcoholism (alcohol dependency syndrome) as well the risk of liver disease.

Daily alcohol misuse is more harmful than 'binge drinking' although this is NOT a recommendation for binge drinking. It is thought that acute exposure to alcohol followed by a period of no alcohol usage allows time for liver cells to recover somewhat before the next insult, unlike frequent drinking which slowly but steadily leads to irreversible liver damage.

The usual recommendation is that men and women should not consume more than 21 and 14 units of alcohol per week, to reduce the risk of both alcoholism and liver damage. The probability of both outcomes increases dramatically if the consumption reaches 50 and 35 units for men and women respectively, on a sustained basis.

It is thought that various factors contribute to the tendency for alcoholism. They include culture, environment, constitution and of course, genetics.

Environment is of course important as the family background and stress environment the drinker lives in affects his tendency to turn to alcohol.

The role of genetics is being elucidated in research. It appears from studies of families, including those with twin children and adopted children, that there is some degree of inheritability of the tendency for alcoholism. It is considered a partly inheritable disorder with considerable phenotypic variability.

What exactly is inherited? It is thought to be an inheritance of vulnerability and susceptibility. It is thought to relate to various chemicals and receptors in the body. But as with many things, it is ultimately a complex interaction between inherited traits and environment.

It is not known why some population groups are susceptible to alcohol liver disease while other develop cerebral, pancreatic or cardiac disease.

Maintain a healthy balanced diet, low in cholesterol and triclycerides (fats), especially saturated fats and trans fats. Do aerobic exercise regularly, perhaps 3 times a week, half an hour at a time. Together with restrained alcohol usage all this helps to reduce the chance of fatty liver.